Can One Missing Shingle Cause a Roof Leak? If you have been in the path of recent storms…

You may have noticed that your roof is missing some shingles.

Or maybe your roof is missing just one shingle.

“Can one missing shingle cause a roof leak?”

If you see a small shingle laying in your yard, it may be the tab that tore off from a 3-tab shingle.

With a strong wind gust, wind can get under the shingle and lift.

Sometimes the tab folds back and promptly rips off in the wind.

If that’s the case.

Where one shingle tab blew off your roof – you have a 1 in 3 chance that the missing shingle was sitting directly above an open seam between the shingles below.

So yes, your roof can leak with one missing shingle. 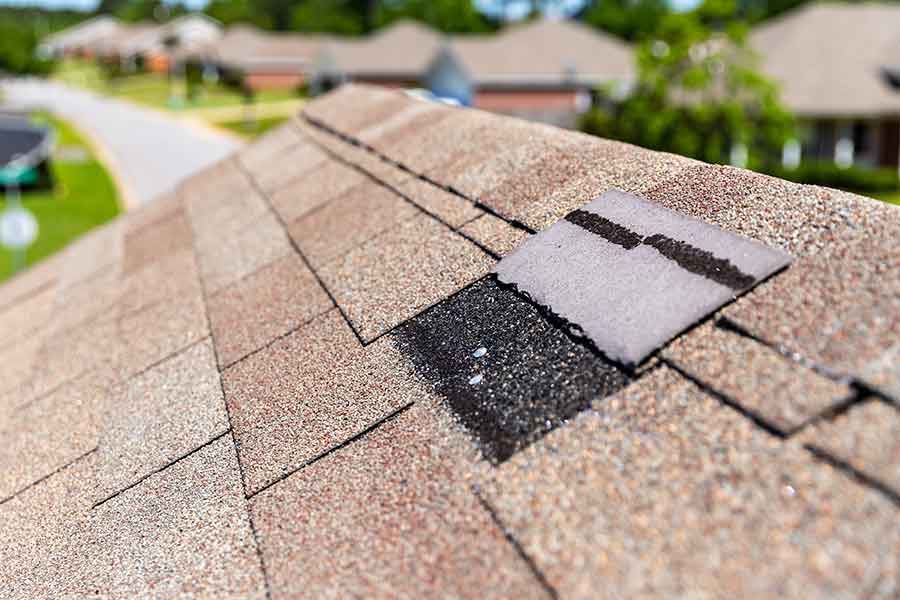 That’s because when standard 3-tab asphalt shingles are installed, they are placed side-by-side, with the next “upper” row of shingles covering the side seams between the lower row of shingles.

If one shingle tab tears off, it’s possible that it had previously been laying directly above a seam.

And without that top shingle in place to shed water, you’ll have an unprotected gap between the lower shingles.

Exposed to water as it rains. Water will seep into the gap, causing a roof leak under your shingles.

You may not see evidence of a roof leak right away, however.

Because… below the shingles and above the roof sheathing lies a layer of felt paper.

This felt paper may repel some of the water…

…but it will only do so temporarily.

You should contact a local residential roofing company for help.

Because a missing shingle left unfixed, could lead to a much bigger roof leak – especially in heavy rain. If the missing shingle was not covering a seam, chances are that it was covering nails in your roof.

And exposed nail heads have a tendency to leak over time.

So, your roof still needs attention.

In addition to that, the upper part of each shingle is designed to be covered by the shingle course above.

If you look closely, you will see that the area where you have a missing shingle is darker than the surrounding shingles on your roof. 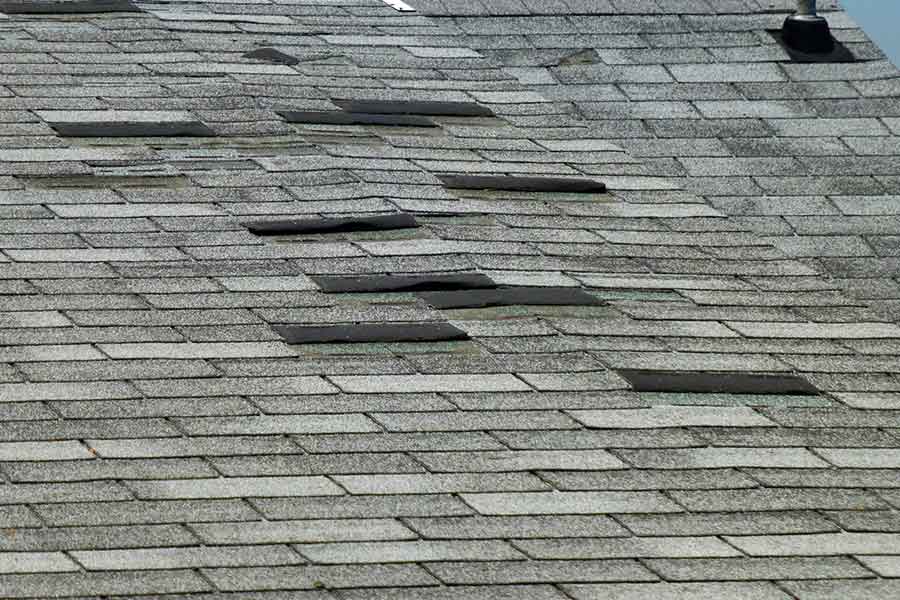 The upper part of each shingle includes fewer granules embedded into the asphalt.

The mineral granules on each shingle protect the black asphalt layer of your shingles from harsh UV rays from the sun.

If you post postpone replacing missing shingles, the lower shingles will eventually fail and leave you with a roof leaks.

While 3-tab roof shingles can tear at each tab, an architectural shingle has a more unified body across the entire width of the shingle.

If you are missing an architectural shingle, you may have larger sections of your roof missing and may have more significant roof storm damage.

Here’s a roof where several shingles have been torn away. How to Replace Missing Shingles

Now let’s look at what a contractor would do to repair missing roof shingles.

This video explains the process to repair your roof by replacing a missing shingle.

In short, you will need to replace the entire shingle that was torn, while protecting the integrity of shingles above and below the one being replaced.

PRACTICE SAFETY FIRST: Climbing and working on a roof is very dangerous. You need the proper safety gear and experience to ensure your safety. If you don’t feel completely comfortable accessing your roof, call a professional local roofing company.

It’s important that you replace the missing shingle as soon as possible.

Again if you’re not comfortable completing the repair yourself, call a professional roofer.

It’s what they do.

A good roofing company will repair missing shingles for a reasonable cost.

And you can rest assured that your home is protected from roof leaks and water damage.

Tulsa and Northeast Oklahoma has played host to dozens of severe wind events recently, causing roof damage in Tulsa. As a local roofing company, Pro-Tech Roofing can be onsite within hours.

If you notice a missing shingle, you may have wind damage to other parts of your roofing system. And this should be promptly addressed.

Request a complimentary roof inspection from a local roofing company.

We provide residential roofing services in Tulsa and throughout northeast Oklahoma. View a more complete gallery of Oklahoma roofing projects.